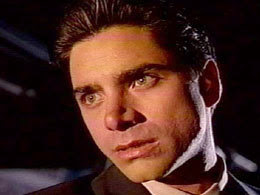 The Story behind this movie involves the disappearance and murder of 10 year old Jessica Guzman. Jessica was murdered by Alejandro Henriquez a local cab driver in the Bronx back in 1990. Jessica's body was discovered in bushes alongside the Bronx River Parkway, just south of the Bronx Zoo in October of 1990, and the bodies of Nilda Cartagena, 13, and Heriberto Marrero, 15, were also found within a two mile radius. Jessica's death was caused by "homicidal asphyxiation. Henriquez was convicted of killing two others Lisa Rodriquez 21, and Shamira Bello 14. At the time this story broke, Henriquez was being held already in connection with an assault on a 3 year old boy.

Fatal Vows The Alexandra O'hara Story Part 1
So in the beginning of the movie mom is getting her little boy Brian ready for school. As they are headed out of the door on the buys street, they see several cops headed to the scene of a crime. The remains of a young lady is found there. Later it shows Alexandra O'hara missing her bus. She is offered a ride by a man named Nick Pagan. He starts spinning his tales about owning a fleet of delivery cars.

True: this really happened. This criminal, Alex, loved to brag about what he had. In reality, he was just a cab driver.  The real location was New York City.
In the next scene Nick calls Alexandra up to ask her out on a date. She politely declines. While she is walking home with her son, he shows up at her house uninvited with long stem flowers. He introduces himself to Alex's son Brian to try and impress her.

He starts really getting close to Brian, and Alexandra is impressed with Nick. She starts falling in love.

True: Both in the movie and in real life this guy spins lie after lie. Nothing he says is the truth. The real man was the same way. You couldn't believe a word that came out of his mouth. He was also very possessive and he had no regard for a woman's personal space or boundaries.

Side note: I am looking at John Stamos' portrayal of the real Alex Henriquez. I think he was the perfect choice to play this criminal.  In the real story, Henriquez was very dark and handsome as you'll see in the photos.

In the next scene they show Alexandra meeting Nick's family for the first time. His father is shown as this larger than life figure in the family.

true: In the real story, Alex's father did not really raise them. They stayed with their mother. She was the strong one in the family. It appears "that" relationship that they show between Nick and his dad is completely made up. Also, they depict this family as Italian. The real family was Hispanic.

In the next scene Nick proposes to Alexandra in front of his whole family. She accepts.

Here are some ways that killer Alex Henriquez has been described.

A high roller
A big spender who would lavish you with gifts.
Had a job as a cab driver, but always had loads of money on him.
He loved children particularly little girls.
A successful businessman
A policeman: he told everyone he was a cop and that he had connections with the police
He had an explosive temper
He always drove expensive cars. He had a particular liking for the Mercedes-Benz.
The devil. He was often referred to as "the devil" by the victim's family.
He was a very small man. He appeared larger on tv and in the newspapers.
He was very skillful at romancing and seducing women.
He always placed himself with rich people despite his Bronx background.
He kept lots of secrets. He lived a double life. He juggled women and relationships, he even lied about careers, and no one was the wiser.


Here is a story that was sent to me.

The two detectives in the case Papay and Silverman went through his background with a fine tooth comb. That found out everything they could about Alex Henriquz from the time he was born. I am trying to find out if the (occurrences) between him and his father are true.

When he was growing up verbal and physical altercations was a normal part of his family structure. His father had no problem using physical force with them, but he would defend them to the end, especially Henriquez. During the trial, he did not like the way that Alex was being humiliated in the public eye.

*if you know anything about his family background please send me an email so I can add to the list
Posted by Traciy Curry-Reyes at 9:56 AM No comments:

While Alejandro Henriquez was awaiting trial some prisoner's tried to kill him. He received a stab wound to the chest and he suffered a collapsed lung. He had to be hospitalized a few weeks leading up to the trial. People were mad about this case. The neighborhood was a Hispanic Latino neighborhood in the Castle Hill section of the Bronx. They wanted justice and the other inmates tried to give it to them. I wonder how prison life has been for him since that time.
Posted by Traciy Curry-Reyes at 6:14 PM No comments:

Don't have proof of this, but the movie is told from the perspective of the wife. She must be the one who sold her story to the producers. I believe the two police detectives also helped with information on the real case.
Posted by Traciy Curry-Reyes at 6:11 PM No comments: